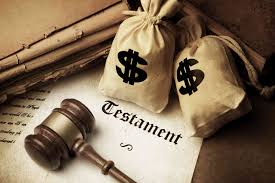 Any person nominated to receive an inheritance, whether it arises from a will or by virtue of the laws of intestate succession, may choose either to adiate (accept) or repudiate (renounce) that inheritance.

Where a deceased dies testate or intestate and certain of the testate or intestate heirs elect to renounce their right to the inheritance, the provisions of section 2C(1) and (2) of the Wills Act 7 of 1953 or section 1(6) and (7) of the Intestate Succession Act 81 of 1987, respectively, must be adhered to.

“Surviving spouse and descendants of certain persons entitled to benefits in terms of will.

(2) If a descendant of the testator, whether as a member of a class or otherwise, would have been entitled to a benefit in terms of the provisions of a will if he had been alive at the time of death of the testator, or had not been disqualified from inheriting, or had not after the testator’s death renounced his right to receive such a benefit, the descendants of that descendant shall, subject to the provisions of subsection (1), per stirpes be entitled to the benefit, unless the context of the will otherwise indicates.”

Section 1 of the Intestate Succession Act

However, where A dies intestate or testate and he only leaves children, and only some of the children renounce their inheritance, such renounced inheritance will only devolve on the remaining child, if the renounced heirs have not left any descendants who will represent such heirs such descendants will represent the renounced heirs, and division of the estate shall take place per stirpes.

In other words, consequences of repudiation of an inheritance and what will happen to the repudiated benefits will depend on the terms of the will, if there is one.

The issues and consequences of Section 2C(1) of the Act has been dealt with in Moosa NO and Others v Harneker and Others 2017 (6) SA 425 (WCC), where uncertainty arose around the meaning of ‘spouse’ as it is unclear whether ‘spouse’ under the Act includes persons who are married under religious law such as, Shari’ah, Judaim or Hinduism, and whether Section 2C(1) includes female spouses who were married to the deceased testator at the time of his death.

The legal issue for consideration in Moosa NO and Others v Harneker and Others was in view of the equality provisions in terms of the section 9 of Constitution, in light of the provisions of Section 2C(1) of the Wills Act and whether it can be extended to protect surviving spouses in polygamous Muslim marriages. The deceased married two woman in terms of Muslim rites

The marital home was an asset in the deceased’s estate which his Executor wanted transfer into the joint name of both wives in accordance with the deceased will,  and as read with a Redistributions Agreement concluded by his children born of both marriage. The agreement further recorded that the children renounces their testamentary benefit and this triggered the application of Section 2C(1) of the Wills Act.

The court in addressing the question whether the exclusion of spouses in polygynous marriages as envisage by Section 2C(1) and enforced by the registrar of deeds, violates the equality provision as contemplated in section 9 of the Constitution and specifically looking at Section 172 of the Constitution and weighing what is just equitable.

The court held that: “ For purposes of this sub-section, a ‘surviving spouse’ includes every husband and wife of a de facto monogamous and polygynous Muslim marriage solemnised under the religion of Islam.”

Do not Trust a Trustee………….. (Without Authorization)

How much Cannabis is too much?